The other day I attended a large XR meetup in Tokyo, Japan. The meetup name is "xR Tech Tokyo #15". I reported about the event because it is worth reporting to overseas XR communities.

Presenters in each meet up belong to from academic societies to entertainment and industrial business domain.

The post describes full presentations and their slides made by slideshare, speakerdeck and so on. 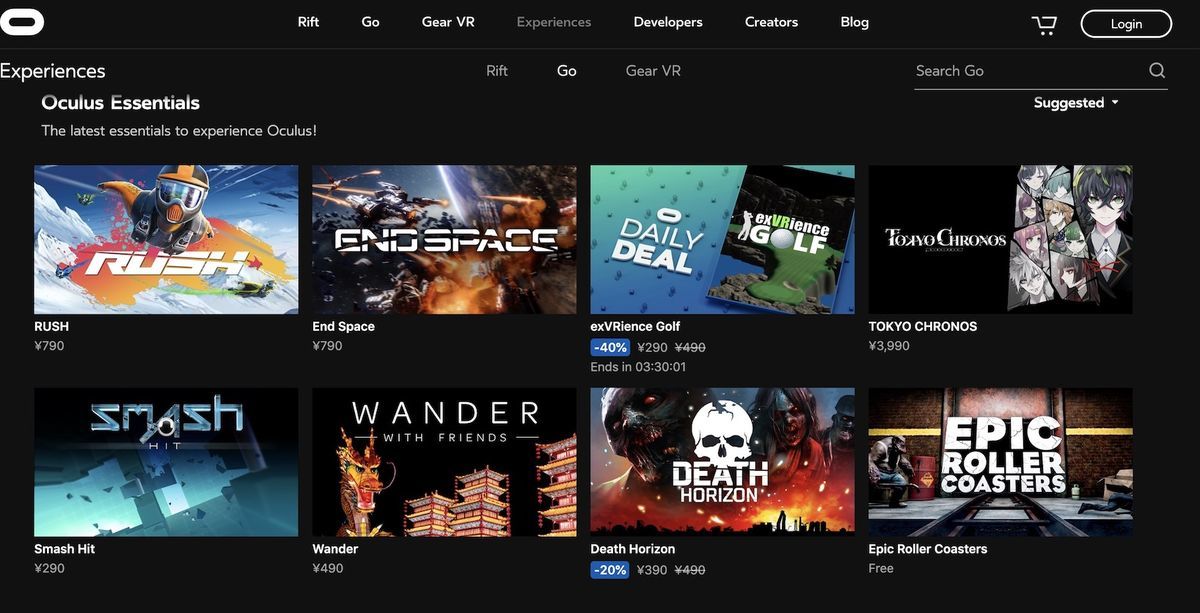 The persenters said it was difficult to sell an anonymous game in VR market. Therefore, they made Tokyo Chronos fun communities first and made fun events until the release day. These fun users bought and posted good review after the release day.

"Persona", "DANGANRONPA", and "Steins Gate" were as reference to create design of Tokyo Chronos.

These games are quite popular RPG or visual novels in Japan. If you don't know these games, check their web sites. You can understand character designs of Tokyo Chronos are similar with these games. Affinity design attracts gamers who likes these games.

Virtual market is 3D avators and 3D data market place in VR space. Attendees of virtual market put on their VR headset and log in the market. They move around freely, talk with each attendees by VR controller. The presenters are founders of the market. 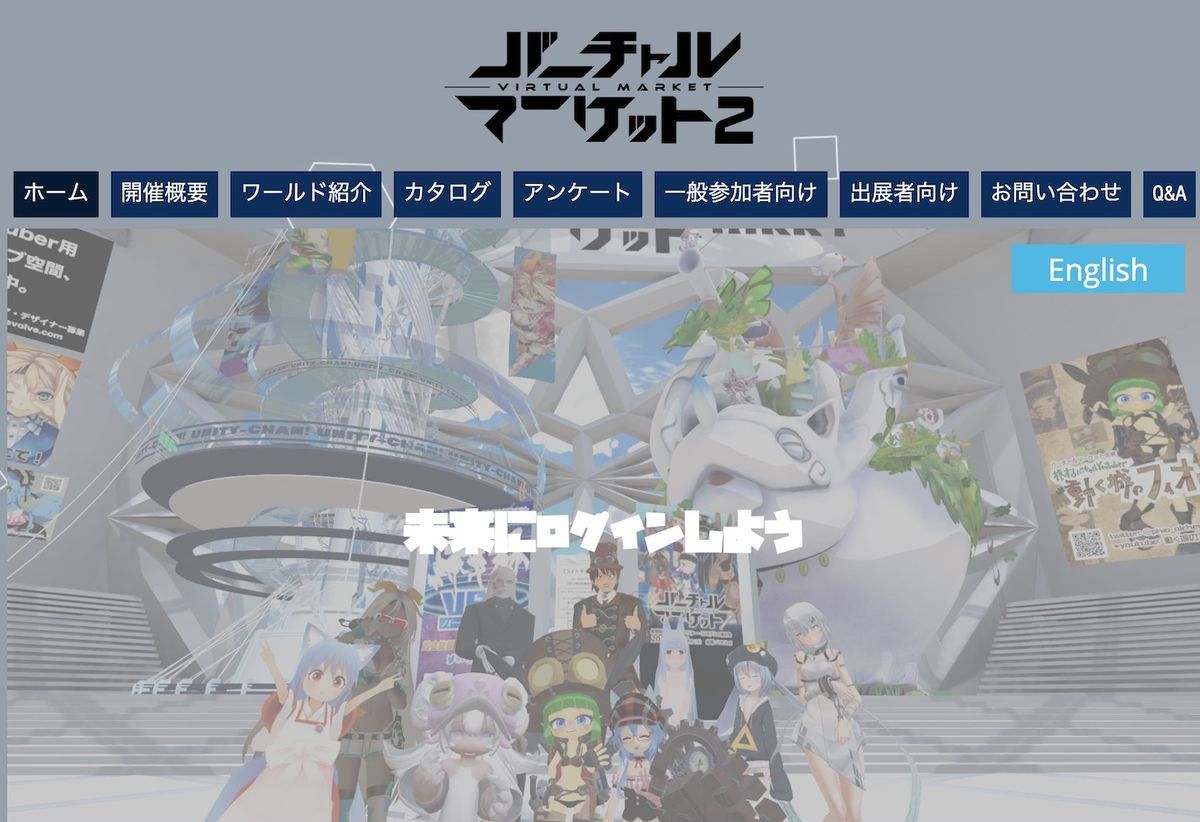 Current virtual market has 6 worlds and these worlds has various stores. 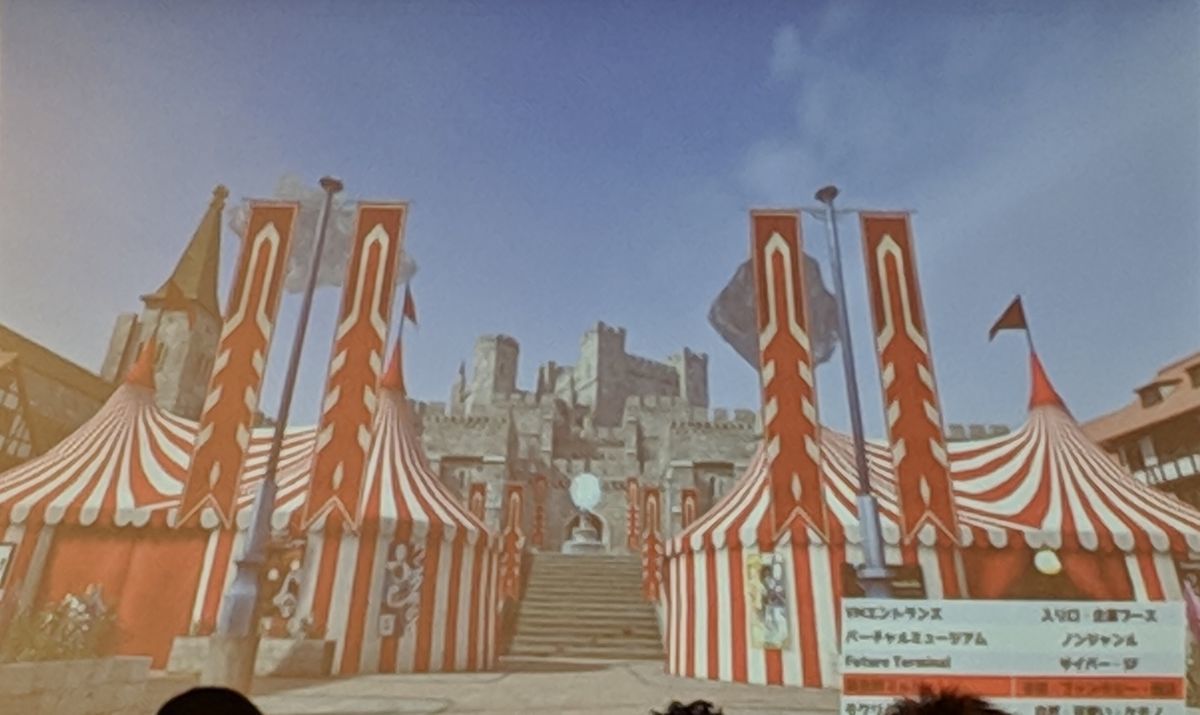 The presenters explained problems for increasing users. These are new common sense in VR world. Human can not do the following things in real world. But human can do in VR world. Such things are not familiar with VR beginners.

To increase VR users, we have to get VR beginners to understand such new common sense. The presenters introduced two ideas.

In "Virtual Market", an icon like elevator is set on an area. The area means attendees can move up. 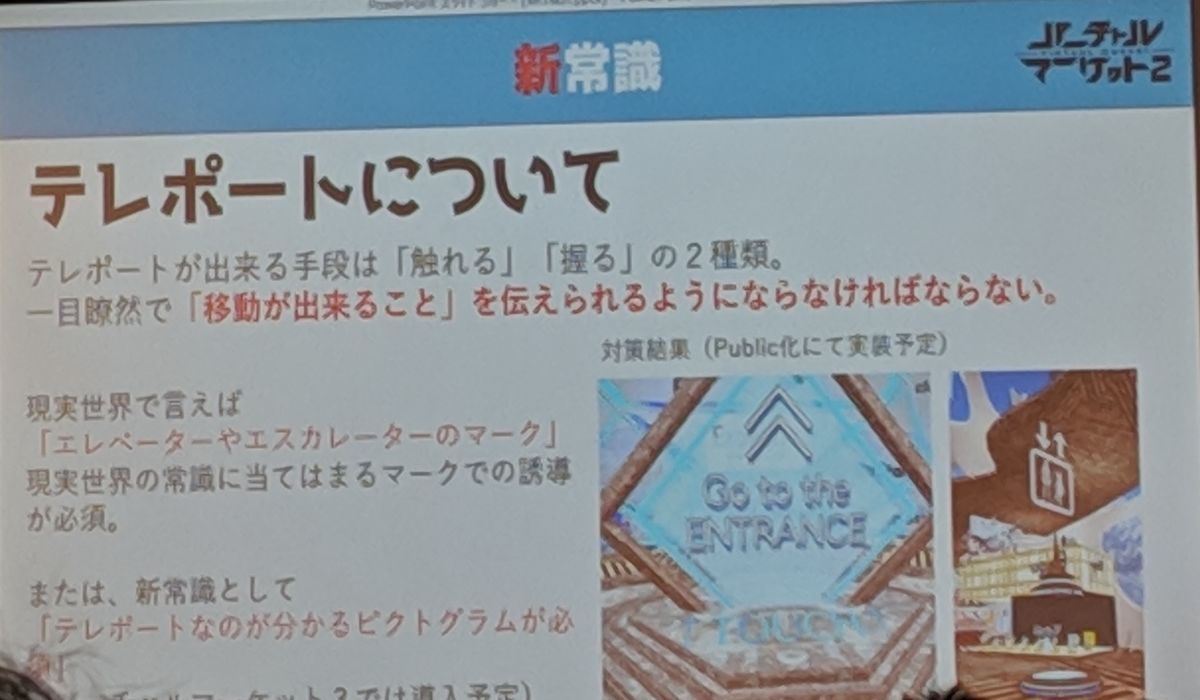 The presenters said we should propose new icon for VR world.

(2) Fool proof idea should be adapted for users

Fool proof is a concept not to make users injured even if users use wrongly.

Many controller buttons make VR beginners confuse. If their appearance changes when pushing a button for talking with others, they dislike to dive into VR world and communicate with others. Therefore, foolproof should be considered.

"eata" is a restaurant recommendation service by food pictures. Currently it seems to be launched only in Japan.

One of the unique points is that the criteria of the site is not users comment and users evaluation rate. If you use "eata", you can see delicious foods. When you select a food picture, you can check a restaurant information.

"eata" adapts 360 photo VR to inform an atmosphere of the restaurant.

5. A prototype and problems of VR during walking

The presenters proposed a prototype of VR during walking. A final goal of in this study is equal to "Hyper Reality".

In the world, we use VR headset every time and everyday. But we have already had a problem with smartphone. It is what is called smartphone zombies. 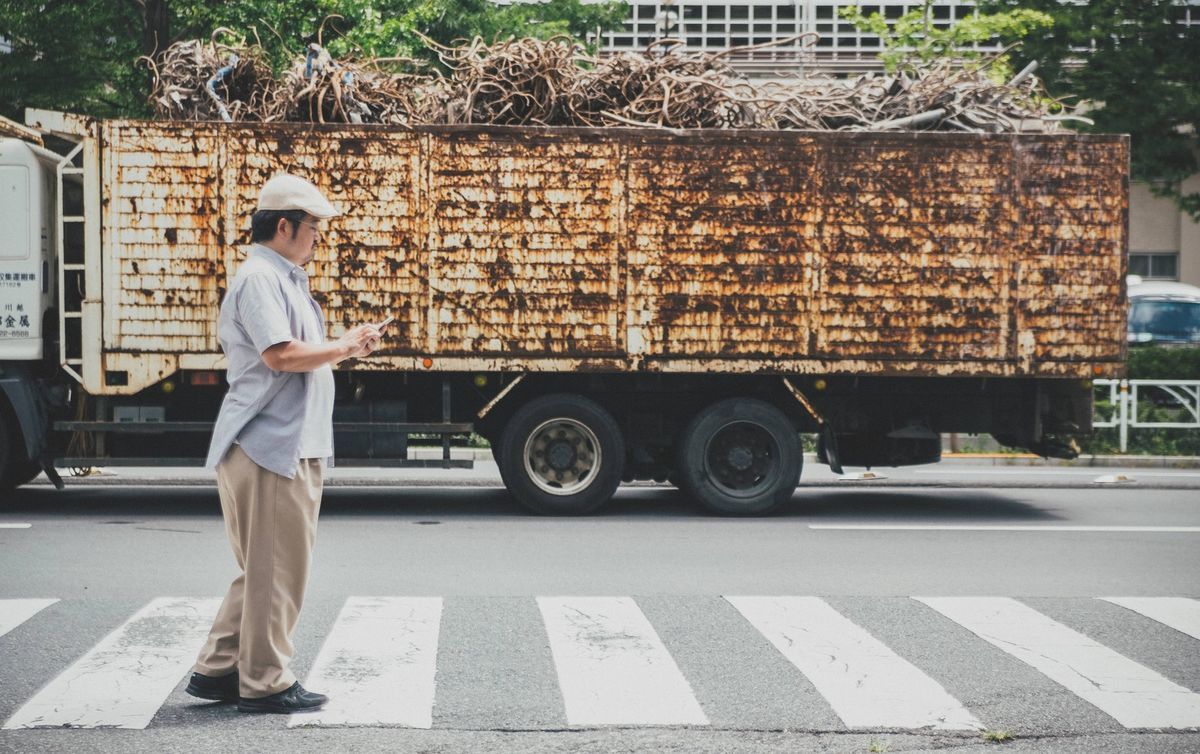 The same problem may happens if users keep to put on their VR headset. The presenter proposed a prototype as shown in the following picture. 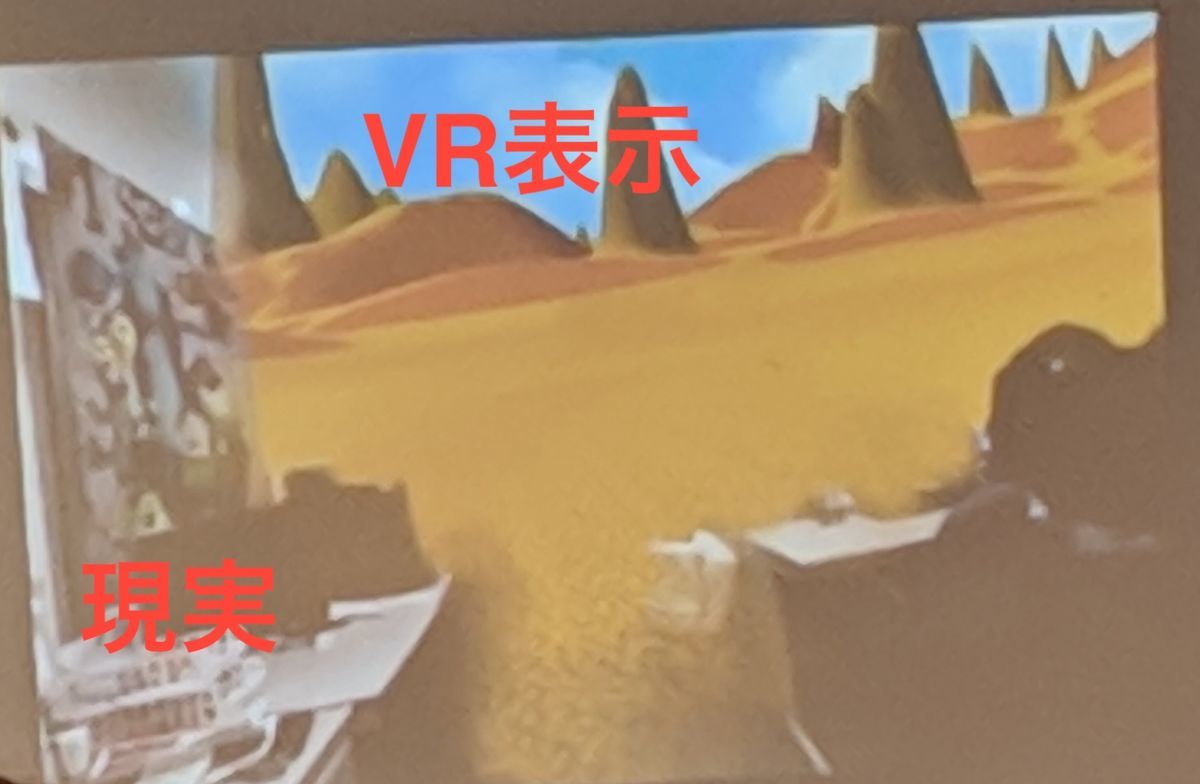 Only far area is described as VR world. Near area is not described. The presenter says he will improve the prototype.

6. A block chain and XR potential

The presenters proposed a new digital data sales transaction platform for VR. He said if VR becomes popular, digital data and avators may be illegally copied. If some huge companies which manage digital data go bankrupt, many people are affected.

Therefore, the presenter proposes a new digital data sales transaction platform "Conata". "Conata" is based on blockchain technologies. The picture is a sample image of Conata. 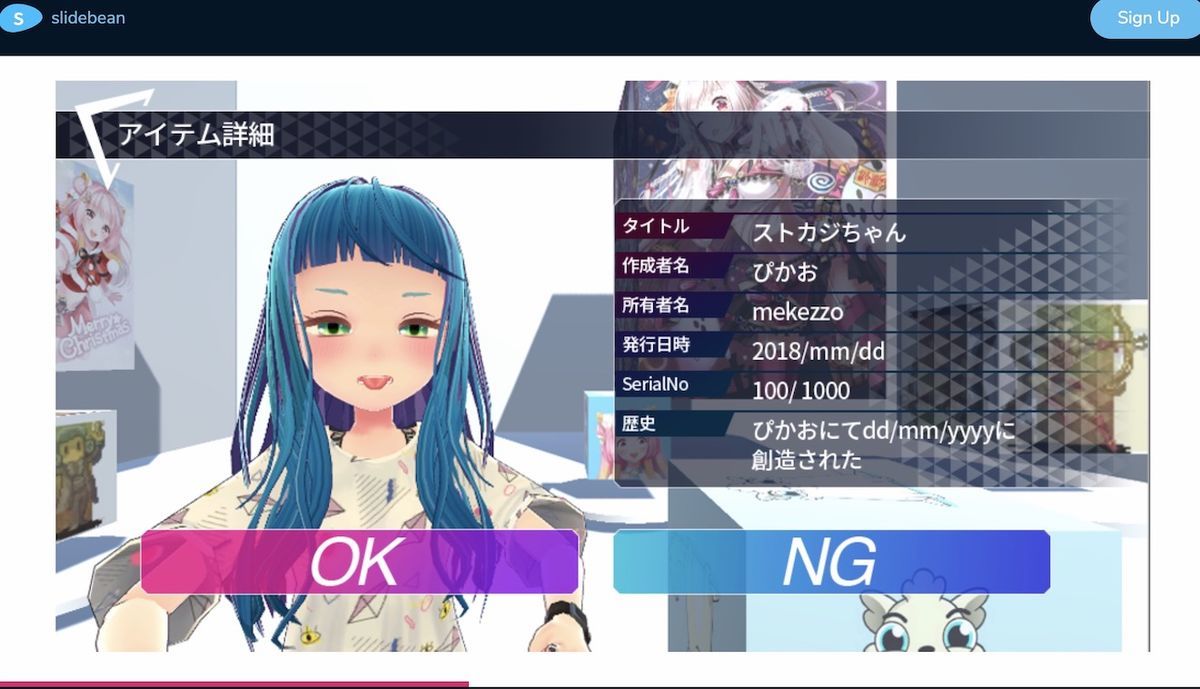 The post is part of the 15h meetup report. Other attendees posted reports not only presentation but also demonstration. (These are written in Japanese)

I'll increase English posts not only reports but also technologies. Check the category URL if you are interested.